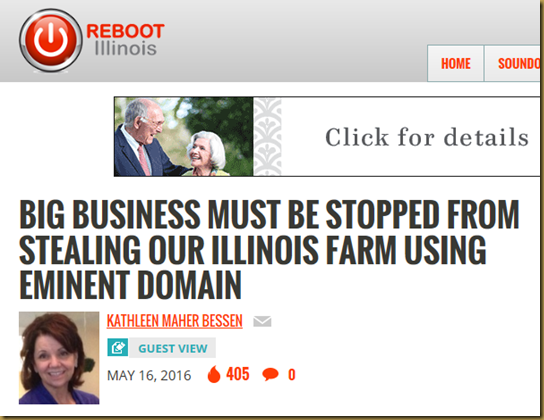 I write to you today, in the hope that you might be interested in, and possibly investigate further the Great Lakes Basin Railroad project. While it is touted as a pro business venture, there is great opposition to this proposal among the farm and rural community.

I am a native Illinoisan living on the family farm that will be designated sesquicentennial in 2019.  As of March 2016, we became aware of a proposed railroad that would cut through our farm ground within a few 100-ft of our home.

Originating in LaPorte, IN and ending in Milton, WI, the majority of this railroad will run through our state of Illinois.This Great Lakes Basin Railroad project is a private entity, seeking the use of eminent domain.  Currently the GLBR is under environmental review by the Surface Transportation Board, a process expected to take from 18-36 months.

The project manager, Frank Patton, has been featured in several prominent publications — the Wall Street Journal, the Washington Post, the Chicago Tribune, as well as numerous local media outlets.  Patton’s narrative states their intent to provide “just compensation” for the necessary ground.  His offer, I believe, is evidence of his ignorance of the agriculture business and an insult to the intelligence of the land owner.  In each interview, he states that the farmer would be allowed free access to the rail line. Farmers are painfully aware of the impracticality and absurdity of this statement. The prohibitive cost to the farmer would include building the rail spur, and providing for onsite weight and inspection. The minimal information put forth by the GLBR has been broad statements that are woefully inaccurate, if not actually untrue.

The Grundy County Board invited Mr. Patton to speak about his project on May 2nd at the Morris Community H.S. His opening comments were to insist that this rail line would in no way affect our field drainage systems and waterways, but did not provide a single detail or explanation.  His response to our concern that our homes and property would be devalued by the close proximity of the train was to flatly say, “I don’t accept that premise.”  Again, no substantiation.  When asked about the identity of his non-disclosed investors, he offered that he actually knew a couple of investors who could fund the entire estimated $8 billion project, but would still seek federal assistance.  Per the Morris Daily Herald, May 3:

Patton answered one question about whether he would use Railroad Rehabilitation & Improvement Financing for the project by stating it is one option they have looked at.  “The RRIF currently has a balance of $30 billion and the federal government is aggressive to use it,” Patton said.

To add injury to insult, our own tax dollars may fund this devastation to our livelihood. Again and again, big money maneuvers it’s way through all the loopholes and lobbied legislation to drain our resources for their own private gain.

We vehemently oppose the use of eminent domain for private gain.  In searching the internet, there are countless articles about the practice being no longer used for the greater good as it was intended, but instead used to facilitate the greed of big business.  Our small business has great value, don’t steal it from us.  There is no “just compensation” for ground that we do not want to sell.